When is the best time to visit Uganda

Looking for the best places to visit in Uganda? In this guide, we have shortlisted top 10 of the most beautiful and most interesting attractions in Uganda.

Uganda, also known as the “Pearl Of Africa”, offers some of the most breathtaking wildlife terrain in the world, it is in the African Great Lakes region and also lies within the Nile basin, and has a varied but generally a modified equatorial climate, Tourists here will find classic African scenery: Murchison Falls, Lake Victoria, Source of the Nile River, and so much more . Uganda is home to some of the world’s most luxurious private game reserves and lodges, Wildlife lovers come here from all corners of the globe.  These are the best tourist destinations to visit in Uganda. 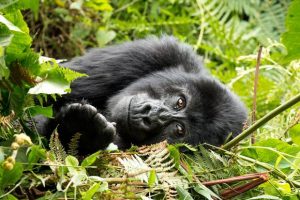 Bwindi Impenetrable National Park is home to more than half of the total world’s mountain gorillas population, with over 30 elephants as well as 120 mammals species among which are 7 diurnal primates, 360 bird species and 200 species of butterflies.

The gorillas are only found in this region. Mountain gorillas differ from their lowland cousins as their fur is thicker and adapted to the colder temperature at high altitude. In addition to the gorillas in Bwindi, the birds here are also incredible and the forest ranks as one of East Africa’s best regions for bird life and bird watching 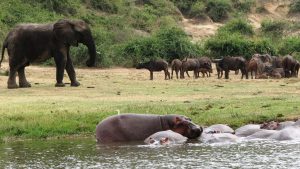 The Queen Elizabeth National Park sits in the western side of Uganda, which is a few hours drive southwest of the country’s capital and largest city, Kampala.Few reserves in the world can boast such a high biodiversity rating and with landscapes including savannah, bushland, wetlands and lush forests.

Covering 1978 sq km, scenic Queen Elizabeth National Park is one of the most popular parks in Uganda, inhabited by 96 species of mammals, including hippos, elephants, lions and leopards as well as chimps and hyenas. The remote Ishasha sector, in the far south of the park, is famous for its tree-climbing lions But what you don’t want to miss include the birdlife and the wonderful boat trip on the Kazinga. 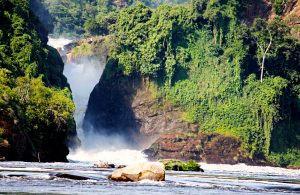 Being the largest national park in Uganda, the Murchison Falls sits as the jewel in the crown of the protected area. The falls was named after a president of the Royal Geographical Society and is the main attraction.

Its impressive animal populations and superb activities are further augmented by its location, which straddles the Victoria Nile as it makes its way through multiple rapids and waterfalls to Lake Albert. This is an exceptional place to see wildlife and a trip along the Nile River in order to see the powerful Murchison Falls up close. 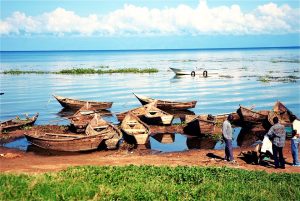 Lake Victoria is the world’s largest freshwater tropical lake and sits as the jewel in the crown of the African Great Lakes region. Sitting across the borders of Uganda, Kenya, and Tanzania, this is where the Nile River begins, which is the world longest River.

A great place to visit to experience the Lake Victoria region from Uganda is the town of Entebbe where you can feel the breeze from the fantastic lake. Here you can enjoy the relaxing atmosphere and the botanical gardens, which are visited by many different bird species. And also the source of the Nile in Jinja to imagine where this river runs. 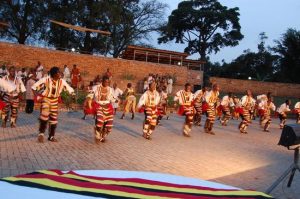 The name itself is from the word for flute, which is the symbol of the troupe because of its diverse and beautiful sound, but also as it’s one of the only musical instruments found across all cultures and is a metaphor for unity.

Ndere Troupe Centre is located in Ntinda about 2 km from Ntinda trading centre. Ndere Troupe is a cultural development organisation that was founded in 1986 by Rwangyezi Stephen for universal unity through music, dance and drama. Ndere Centre is a highly recommended attraction to experience the country’s traditional dance and music. You can enjoy a dinner and theater performance at the center to see a high energy show of Ugandan culture. 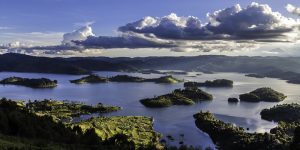 Located close to Kisoro and Kabale and near the border with neighboring Rwanda. Lake Bunyonyi is one of the largest of Africa’s lakes by depth and contains 29 different islands.

The locals call it “place of many birds,” but many tourists call it paradise. With its 29 islands, terraced hillsides, charming shore towns and attractive resorts, it is no wonder that Lake Bunyonyi allures people from all over the world, the lake is regarded by many visitors as one of their favorite lake destinations. Because of its proximity to Bwindi Forest for gorilla trekking.

The Rwenzori, the fabled Mountains of the Moon  lie in western Uganda along the Uganda-Congo border. The equatorial snow peaks include the third highest point in Africa, while the lower slopes are blanketed in moorland, bamboo and rich, moist montane forest.

This UNESCO World Heritage Site offers stunning scenery consisting of waterfalls, lakes, rivers, glaciers and forests that shelter many bird species and chameleons. Hiking, mountain climbing and culture visits with the Village of Ruboni are just a few of the exciting things you can do here. 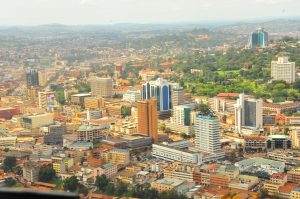 Kampala is Uganda’s largest city and the country’s capital. People here are very friendly and it is very peaceful city, with tourists walking all around the city even in the early hours of the day.

Some of the places that you must tour while in the city are The Uganda Museum, the Nommo Art Gallery, the National Theatre, The Rubaga and Namirembe Cathedrals, The Gaddafi National Mosque, the Wamala Tombs, the Bahai Temple and the building of the Parliament of Uganda. The two main markets of the city are Owino market and Nakasero market both of which are always bustling with tourists. This is one of the largest five lakes that are nearby the wetlands and situated between the towns of Masaka and Mbarara, it accounts for only 20% of this unique lake found in western Uganda. The park covers only 370km² yet it has 5 lakes within.

Lake Mburo National Park is  the only place where you can spot the impalas in Uganda, antelopes as well as the Elands and zebras which are the stars of the park and the most easily seen animal here. There are many different activities to enjoy both on and around Lake Mburo, such as boat cruises on the lake itself to see hippo, crocodiles, and a number of different birds.

A major tourist attraction in Uganda, the Ssese Islands are a group of about 84 islands dotted along the northwestern shores of Lake Victoria. Each island differs in size, shape and exotic flora and fauna.

The islands are not just home to people but are inhabited by a variety of wildlife including some different monkeys, which you can visit on island tours. As a vacation and relaxation spot, you will also enjoy the fantastic white sand beaches. You can visit the islands aboard a ferry from Entebbe.

Above list just gives you a short glimpse at the reasons as to why these destinations should be on the list of every traveller. Top Spots for a Birding Safari in Uganda